Investment and Exports Accelerate the Economy in the First Quarter

The National Statistics Institute (INE) confirms a 2.8% growth in the first quarter of the year and explains that the acceleration at the end of 2016 was due to resumed investment and a sudden rise in the export of goods and services. 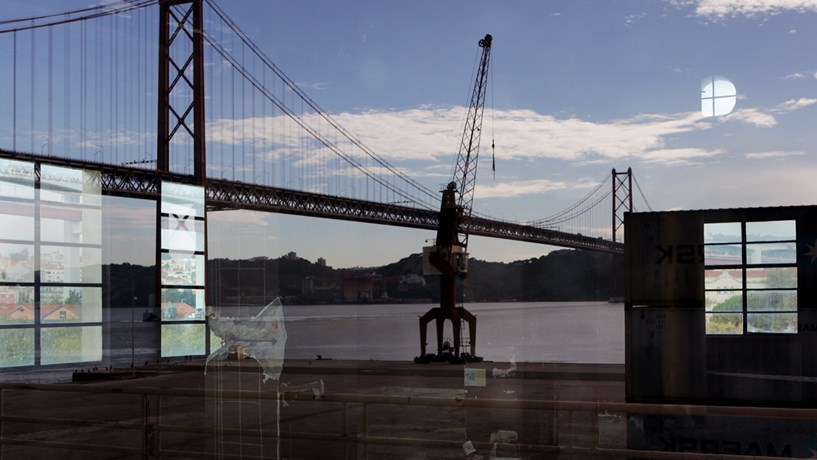 In the first three months of 2017, household consumption continued to grow, but at a lower rate than in previous quarters, and public consumption, year-on-year, dropped. It means that the accelerated growth in this period was primarily due to two factors: exports having surpassed imports; and the continued resumption of investment.

Private consumption, which had gone up by 3% in the last quarter of 2016, now rose by 2.2%, due to fewer vehicle purchases, while public consumption dropped by 0.4%, after stagnating in the previous three months. On the other hand, investment (measured by gross capital formation) recorded the second consecutive quarter of growth, rising from 3.6% to 5.5%, thanks to the construction industry’s more positive figures. All in all, domestic demand grew by 2.2%.

In the foreign trade sector, both exports and imports have gained in strength, but the former surpassed the latter. The sale of goods and services abroad rose by 9.7% (including tourism), while imports have risen by 8%.

Even so, the economic growth of 2.8% continued to come mainly from domestic demand: 2.3 percentage points come from consumption and investment, and 0.5 points come from the net foreign demand (exports subtracted from imports).

Investment: FBC vs. FBCFThere are two indicators adopted by the media to refer to investment: Gross Capital Formation (GCF), and Gross Fixed Capital Formation (GFCF). The difference between the two is in the fact that the first includes a change in (companies’) stocks, and net acquisitions of valuables (non-financial assets that do not deteriorate physically and are used as store of value, such as precious stones and metals, and works of art). Due to the hearsay these last two items may produce, the GFCF is usually more useful to assess what is really going on in investment, in the way most people understand. In the first quarter, FBC grew 5.5% and the GFCF 8.9%.

“The Gross Domestic Product (GDP), year-on-year, increased 2.8% in volume in the first quarter of 2017 (2.0% in the previous quarter). This trend has resulted in the largest contribution originating from net foreign demand, because of the acceleration of Goods and Services Exports having surpassed that of Goods and Services Imports. Domestic demand has remained a high and positive contribution, although lower than that of the previous quarter, revealing a slowdown in private consumption, and an acceleration of investment”, reads the National Statistics Institute’s highlight. 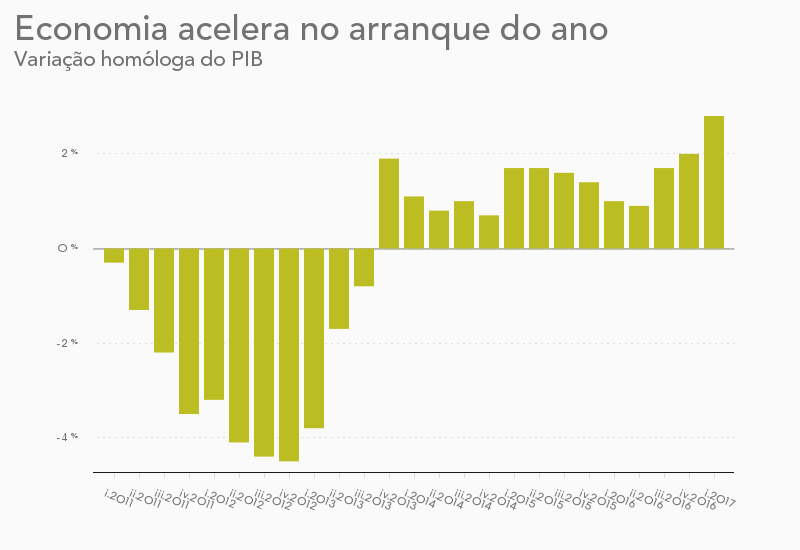 Two weeks ago, the National Statistics Institute announced that the GDP had grown 2.8% in the first three months of the year, which exceeded the estimates of analysts. The variance of 2.8% year-on-year and a possible new strong result in the second quarter make it likely that the Portuguese economy will grow above 2% throughout the year.

Currently, banks and universities that follow the activity data already expect a value above 2% (the government is among the most pessimistic this time, estimating 1.8%). If economists’ predictions are confirmed, the economy will have the best performance since 2007 and will exceed the threshold of 2% for its second time since 2001.

“As a result of the GDP in the first quarter having exceeded our expectations, we once again raised our estimates of annual growth for 2017 from 2% to 2.3%,” wrote Portuguese banking company Montepio, two weeks ago, in response to the first quarter result.

“The growth in the first quarter will surely force us to raise our growth forecast for 2017 because the economic climate and the growth in the Eurozone also seem to be better than initially anticipated”, said Ascensão Costa also, in the name of the Lisbon School of Economics and Management (ISEG). “For Portugal, the growth recorded in the 1st quarter makes it possible and most likely that the growth values will be reasonably above 2% per annum.”

Católica-Lisbon (UCP) has not changed its prediction, but it had seen the GDP grow 2.4%, while BPI, expecting only 1.5%, admitted considering a revision of its predictions to values above 2%.

A greater dynamism in the economy is good news for businesses and families. In addition, more growth should translate to more tax revenue and less spending, for instance, with unemployment allowance. In other words, it gives a significant boost to help achieve the deficit goal for this year, of 1.5%, set by the Government.

Any cookies that may not be particularly necessary for the website to function and is used specifically to collect user personal data via analytics, ads, other embedded contents are termed as non-necessary cookies. It is mandatory to procure user consent prior to running these cookies on your website.